It was on September 28, 2015 that   I was awarded the distinction of PPSA (Proficiency in Photography) by the then  President  of Photographic Society of America (PSA),Mr John Davis, in  the inaugural function of PSA international conference held at hotel Holiday Inn, West Yellowstone. A galaxy of prominent photographers   was present on the occasion.

Homage was paid to those eight PSA members, including Mr K.G.Maheshwari APSA of India, who passed away since last conference. A 2- minute silence was also observed to mourn their demise.It was a proud moment to see our National Flg among flags of many countries displayed there.

It was a rare moment of joy, not only because I was awarded, but  more so because my brother Mr Brij M. Sapru and my wife Mrs Sunita Sapru were with me. I appreciate the gesture of the PSA as both my wife and brother were treated as guests.
Also,I got the opportunity to meet some of the senior members of the PSA with whom I had earlier been interacting only through emails.They included Ms Jean Timmermeister, FPSA, John Larson, Jr., APSA, MPSA. It was also pleasure to meet Kristina Erin Kaye FPSA,EPSA, Director, ROPA who had informed me about award of PPSA. It was nice to meet Mr Stan Bormann, APSA, EPSA, the incharge of the conference.
The then President of PSA, Mr John Davis APSA,PPSA was very friendly. He even tried to speak Hindi but admitted that he had tried to learn Gujarati.

All said and done, but I am deeply indebted to my brother Mr Brij M.Sapru who had, before I landed in the USA with my wife, made all arrangements not only to travel to PSA conference, in the other end of the USA  and stay there but even for other places to see and enjoy the visit to the USA. 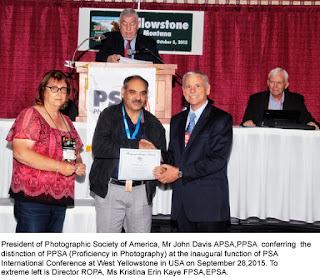 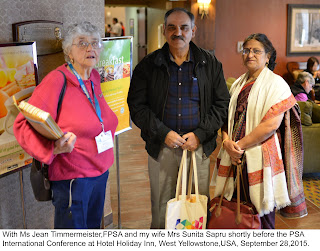 Posted by Subhash Sapru at Wednesday, January 27, 2016 No comments:

After about a fortnight of the judging of Ist TPAS International Salon of Photography-2015, I had another opportunity to judge the PJ Quarterly Contest of the Photojournalism Division Photographic Society of America (PSA). It was the initiative of Chairman, PJ Division of the PSA, Mr John Larson who had been persuading me to do it online while being in India and simultaneously he would manage things in USA. It was at the PSA Conference held in West Yellowstone in September, 2015 that when I received my PPSA distinction, Mr Larson was there and he again asked me if I shall do such a judging. I agreed to his proposal and then as per the rules,  looked for two more experienced photographers here as one of them should be from a newspaper. My choice was Mr Deep Bhatia EFIAP, AIIPC and Principal Photojournalist of The Tribune, Mr S.Chandan.

As there is a considerable time difference between USA and India, we decided January  21, 2016 at 8:00 p.m. (our time) and Mr Larson had morning at his place. We judged 100 images on line through a software as Mr John Larson showed images one by one on computer screen, we three scored them and finally decided awards and ribbons. We appreciated the manner in which he conducted the judging as it was totally fair and transparent.
Posted by Subhash Sapru at Tuesday, January 26, 2016 No comments:

I had the opportunity to be a member of jury for Ist TPAS International Salon of Photography 2015 organised by Tri-city Photo Art Society in Chandigarh. It was a privilege to judge images with Mr Anil Risal Singh, MFIAP,ARPS, Hon.FIP;  Mr Adit Agarwala, EFIAP,FRPS and Ms Sona Beniwal EFIAP,FFIP, FSOP on January 5,2016.
Posted by Subhash Sapru at Tuesday, January 26, 2016 No comments:

After a gap of almost a year I again began to enter my images in international photo exhibitions and made a breakthrough in Photo Art Prague-2015 organised by Photo Art  Magazine from Prague, Czech.


Interestingly, according to the statistics released by the organisers, in case of Photojournalism Section, out of 718 works arrived, 188 were accepted. And out of 183 arrived participants, accepted participants  were 91.I am the only entrant from India whose one image was accepted.
Posted by Subhash Sapru at Tuesday, January 26, 2016 No comments:

It was in April 2013 when I last wrote a few words in my blog. A lot has happened since then but somehow I could not pen down my thoughts or what I had experienced. Now I think I should again make a new beginning. God has been very kind to give me a new lease of life in December 2014.
Posted by Subhash Sapru at Tuesday, January 26, 2016 No comments:

Subhash Sapru
CHANDIGARH, --, India
I am an author, mentor,contributor and exhibitor of prolific images at world-wide exhibitions. Have got photography honours and distinctions of Hon.Excellence USPA,APSA,PPSA,AIIPC, I retired as Deputy Director (Press) from Information, Public Relations and Languages Department of Haryana State Government in India. I have traveled widely within India and USA.